While reading the English textversion of the Meeting of the Valdai International Discussion Club, a growing sense of injustice came over me. Just another injustice which we have to deal with when it comes to the discrepancy between information and disinformation. Personally, I noticed some things in this speech. Firstly, the ‘reason’ that the words of Putin are interlaced with. I can not remember the time that I heard such words from politicians. According to the questions and answers you can see how he reacts, in conformity with his first promise in the beginning that he wants to be direct, sometimes hard, but honest without operating with conventional diplomacy, for that will fit better with a casual drink. I totally agree with him. Honesty fits into the time we live in and diplomacy is always about gain, preserving achievements and money! Not very innovative.

Are we through disinformation and misleading propaganda back in prehistorical times?

I kept silence for a while by the fact that he does not find a revolution desirable, but that it has to be ‘evolution’. Aren’t we working on this with ourselves every day, though mostly in silence? From revolution to evolution, only one letter makes a world of difference and it would reduce the bloodshed to zero. He repeats the same words later again while answering the questions. This man really knows what is going on, whatever you may think about him. He knows everything about the elite with their horrible ‘Agenda 21’ and the New World Order all the way through, I wrote earlier about this. Putin is not heard. Should not be heard, according to the western leaders. Oh, really?

I will ask you; who are those Western leaders? Are those the people we have chosen in our “democratic” system? Are they still doing what we want? May I ask you, are you the one who needs a war? May I ask you whether you want to live in poverty or in peace, or do you care for others, living in poverty? Would you really like to go bankrupt because the money is gone, due to the fact that it was already created out of nothing for years? That is something that happens to many of us, and there is also a lot of suffering, but mostly kept silent. I know there is a lot of ‘hidden poverty’, silent sorrow and deep frustration. Many young bankers died, most would allegedly committed suicide while high life-insurance policies (without being aware of) earlier were arranged  by the elite. Number 32 was recently added on the deadlist in October. Do our ‘leaders’ concern? Should we really, with our already very high public debt, also pay for the neo-Nazi mismanagement in Ukraine, while our own problems are not faced or solved? The political world has really become completely insane and therefore the “revolution” from the people stands on the threshold of the battlefield on this very moment. While I feel that we are increasingly evolving as wellthinking and sensing human beings, day by day. I feel myself left in the lurch! But as it turns out, I  am not the only one. Shall we do it together?

I like to follow beautiful people like our Dutch economical experts Willem Middelkoop, Ewald Engelen and Ad Broere, who try to expose all political abuses. They are not little ‘boys’ (or girls), they know exactly what is going on and how it should be in the near future. Like Putin. I dare say in response to this speech. And he also for sure has his quirks and his shortcomings as an ex-KGB agent and a master of ‘chess’. 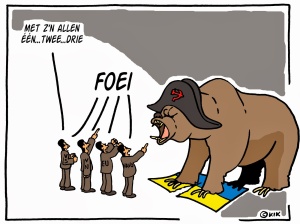 He is the Russian bear in person and you should better not play around with him. And that’s exactly what they do. They hope that he will lose his “reason” by provoking this bear so he proceeds to the (nuclear) attack. Russia then would be the aggressor and that will immediately lead to an act of war against the one that grant asylum to  the “thorn in America’s side’ with the name Edward Snowden”. Yes, Putin also has its own “Russian policy ‘and as he  says,”We certainly have our drawbacks. They apply to the system. Many of them clearly come from the past. There is a lot we need to change. We are doing it gradually, but not through revolution – I would say there were enough in the 20th century, we have had enough – but through evolution.”

But the aggressive, dangerous and bellicose imperialism of the Americans and their European lapdogs urgently need to be stopped, we do not want the current (often denied) WW 3 to extend more with physical bombings. And  Putin is trying to carry this out. He was not waiting for a by the west installed fascist and neo-nazi government that commits horrible crimes against Jews and Russian speaking people in cold massacres. The West is acting against their own interests. Yes, even against you and me as Western citizens. Agree with that? Keep asking yourself questions and find the answer, but please do not listen to the propagandistic and misleading mainstream media. Witness the fact that this speech is shoved under the rug.

And that was the reason for me to translate it in Dutch, from out of that sense of injustice. I will honestly admit; at page thirteen my heart sank to the bottom. I saw in my Word- document that I had to persevere to page 40 and I thought it would be a hopeless task.  But it is less true; when this blog was built on the nearby beach, you now should have walked into a huge ditch that would have been created by the exorbitant number of grateful visitors. A doormat was fortunately not necessary, because no one had dirty feet. I’m glad that I’ve accomplished that huge translation job. Good information is our basic right and we want to claim it back, which is clearly demonstrated by now. That is a good development and very hopeful for our future.

In which world do we live, the old or the new? In both, that’s what I feel. Those from the old world will not let go of anything they possess, most likely by loss of face (= pure ego) and those who are in the new world are to stand at the ready and wait for the go . The starting shot is already heard; too many shots have already sounded everywhere and not without real bullets! They did not fire a blank.

As I wrote in this previous article, I often feel like I’m an alien.

It feels like if my empty words disappear like raindrops in the wind. But they are carried and answered by many who are shouting just as loud, that it should be different from now on. More human, more social, with love instead of hate. Together …

Maybe I am not an alien though, but to be sure I look every morning in the mirror to check if I might be colored a little green overnight. Do I have pointed ears? No, fortunately not, but by now I’ve been suffering from a nasty headache on a ‘wedgie head’ by living in this crazy world!