Sometimes the mainstream media actually make use of a critical review. In the Netherlands we could witness a critical television documentary from de TROS. Recently, we could see a broadcast of an undercover risky venture, in which the editors tried to get a CE mark on a purchased tangerine-bag from the supermarket. 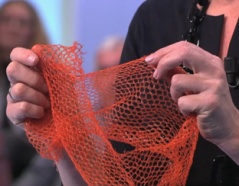 They try to sell it as a pelvic floor mesh. TROS-Radar built in the technical file a number of ‘booby traps’ which should be easily seen by Notified Bodies. Notified Bodies are by the government designated private inspection or testing ‘bodies’ that assess whether medical devices are conform the applicable European directives. And guess what, the CE mark came without any major problem.

It is clear once again! Corrupt institutions receive much money for a stamp of approval that they put shamelessly on your request. Meanwhile, you walk around with lifelong complications because you wear such a tangerine-bag in your body. There you go, justified with literally a sour face!

But there is more crazy stuff going on. The US FDA (Food and Drug Administration) sitting behind their desks, approved developed vaccines manufactured from human tumor cells. They are indeed plentiful available and it is much cheaper and faster than the rearing of animals for this purpose, the doctors say. That the people who get  these cancer cells injected most likely get cancer is apparently not a big problem, because chemotherapy finally provides a lot of extra money for the pharmaceuticals.

When you are suffering from such terrible consequences after these vaccinations, I would highly recommend to take a trip to Brazil for a glass of juice from Graviola tree. If it does not help, it won’t harm either and otherwise the placebo effect may do it’s work. It seems to me a lot more enjoyable to catch a flight to Brazil than to pay a daily visit to the chemo clinic in a hospital for weeks.

Fortunately, more and more people are awakening from their lifelong coma concerning political and health issues. We read: Monsanto stock has been downgraded to ‘Neutral’ from ‘Buy’ after an annual seed dealer industry survey showed bleak returns; a slap on the wrist for stock-holders like Bill Gates and George Soros. ‘Pharma foxes’ Bill Gates and George Soros see their carcinogenic empire slowly but surely collapse. Good news also for the increasingly endangered bees, because the survival rate for these very needed, hardworking and useful co-inhabitants of the earth thereby increases.

That we should be poisoned, and not just by chemtrails, we discovered again recently in France. 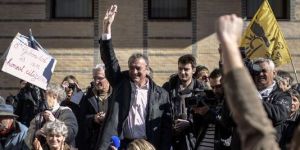 French bio-winemaker Emmanuel Giboulot refused to use preventive insecticides against a disease that had not yet surfaced in his department. He risked six months in prison and a fine of 30,000 euros for this great ‘offense’ (!). But times are changing, albeit slowly. Fortunately, he was acquitted on appeal. Giboulot, who owns about 10 hectares for ‘biodynamic’ chardonnay and pinot noir grape growing, explains possible a new foundation here for the future; reducing the use of massive amounts of chemical junk, which should keep nature at bay and which is an outright threat to our health.

I guess you are aware of the fact that nature provides the basic ingredients for all medical preparations? When you burn yourself in nettles, you do not have to look far to encounter plantain, as an immediately healing plant against the ‘burning’ spots. When you walk into the mountains and accidentally fall down, you can always  find “Arnica” nearby. Something broken, bruised, or bruising? ‘Arnica’ is highly medicinal. And therefore a basic ingredient for various medicines. However, one can not get a patent application on nature-stuff so it is not profitable for the pharmaceutical industry. Hence, they add some toxic rubbish, because then they got the patent and if we get sick of the contra-indications, they earn an extra lot of money. And mother nature wants to grant anything to us, even our self-healing ability as we recognize it and dare to employ it.

Do you suffer from flu, go flat for a while, take your rest because your body wants to get rid of a number of substances and poison that you gathered and need to be discarded. A very natural process.

Especially now that the CDC (Center for Disease Control) admits that the flu shot does not help. Apparently they had to admit, because a number of people died again last week after the flu shot. We already knew and wrote about this many times, but we now live in a time that one after another fraudulent practice is revealed just as the many lies of the governments.

This year with christmas I’m going to decorate my house with quite a few whistles. I am sure they will all be blown; cozy right?
But to earn an extra bonus for Christmas I think I’m going to eat chicken tonight. I can take pictures of the gnawed chicken legs to produce a slick brochure. Then I ask next week for a CE mark so I can sell them to veterinarians. As a new hip for Miniature Pinschers!

All articles on this site are voluntary written for ‘humanity’ and may be republished, provided the author’s rights are acknowledged