Referendum in Scotland was rigged!

Unbelievable! That is the only word left for this event, when we talk about democracy anywhere in the world. Independence? No, of course that’s not allowed!

We knew it already. The UK did not want to Scotland to be independant. As a vassal of the US the United Kingdom was threaten on beforehand: ‘no access to the EU’, what about the euro, there’s no way back if they have chosen, England would probably close the border if … etc. The dog showed one’s teeth in advance.. 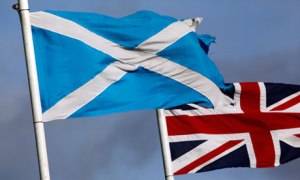 So you can expect that the decision is already known, regardless of the outcome after the counting of votes. The cheating is recorded on video and the police started an investigation. See two videos below. Some people created a petition and they demand a revote of the scottish referendum counted by impartial international parties. Meanwhile more than 80,000 people signed. On Facebook they have a page, and also there they try to do justice to this referendum.

Do you see anything about it in the mainstream media? I sent a tweet to the NOS and the Dutch newspaper NRC because this is news, but no response. Scotland will not be independent and that is what it is. And therefore no news about what’s going on. It does not matter. No of course not, because the one who dictates the news does not want Scotland becomes independent. Whether you’re happy with it now or not, democracy is dead!

I am sick of this. We live in a bubble that governments clogging with propaganda and from the inside out it is almost impossible to break out.
There is a police investigation going on… but how reliable will that be? We all know that they are employed by the government. I signed, what about you?

This article may be republished, provided the source is acknowledged