What is happening to our world? (Part 1)

Series of articles about ‘waking up’! (part 1)

“Nice weather today, neighbor!”while the gutters along the streets acted yesterday as the banks of a river. All it lacked were the fish so you could leave your fishing pole in the attic. An attic which incidentally is flooded by the exorbitant amount of rainfall. All often attributed to climate change, to global warming which we -humanity- have caused by emission gases, industrial emission and aerosol hairspray. It’s a lie!

I’m furious! Furious about the daily lies, which spoils our so beautiful and complex terrestrial life day by day, year by year. Even though we in the Netherlands are most talking about the weather, it is just a small part of the lying propaganda machine, submerges us day by day. Are we stupid and docile sheep? Or are we right-thinking,

sentient intelligent beings with a spiritual core which also includes a higher consciousness, a consciousness that makes itself heard or seen during our dreams or meditative (silence) moments. Awareness … a beautiful word with a very deep meaning.

I personally consider myself, for as long as I can remember, in the latter group, even though I have been for a long time-and perhaps especially therethrough- a (black) “sheep”. But that probably just made ​​me more aware of being ‘different’. And what’s wrong with that? Every human being is authentic and therefore ‘different’ and especially unique, how beautiful, right?

But no, just like in the army, we are forced to behave ourselves as ‘one size fits all’ and adapt to the masses. And this brings me back to the propaganda machine that can only express themselves through various media; another word for mind-control. And as I wrote in previous articles: that control-mechanism we want to get rid of, and we are increasingly wanting to let go because we awaken in ourselves and discover a different view (awareness) which ‘feels’ more like truth. Fortunately, more and more “real” journalists are taking their profession as ‘researcher’ to the real news more serious than ever and choose their own independent course. This I will quote several times in the follow-up articles. Those, who thereby no longer attract the press office’s (by the way, did you know they belong to the 85 richest people on earth, the so called oligarchs, also be known as ‘elite’?) A small group of people  that is calling us ‘the sheeple’. Will you keep it that way?

Returning to the weather; ever looked at the sky? Have you also noticed that there are hardly blue skies like in earlier days? And that the gorgeous blue color is hidden? Complete grids as ‘chessboards’ are everywhere in the sky. They fan out and draw a sort of mist, functioning as sunlight filters. The “sheep” say: “these are contrails from aircraft”. Dear sheep, sleep well and sweet dreams!

Condensation stripes disappear after about a minute. These are ‘chemtrails’ (chem=

chemical) and the project is called ‘geo-engineering’ (see also HAARP = High Frequency Active Auroral Research Program). Stripes with toxins that are expelled according to a certain pattern. Since the nineties, geo-engineering carried out, but it increases on a huge level in recent years.

What they are spraying include dangerous substances such as titanium, barium, uranium and cadmium. Substances that cause severe symptoms such as headaches, depression, lethargy, shortness of breath, asthma, infertility, premature births and miscarriages, skin problems, concentration problems, deterioration of short-term memory, cancer, etc. There is plenty of research done by the really concerned scientists.

Yes, I’m furious! Because our planet and its inhabitants will be destroyed sytematicly. And also because our government do not do anything about it, although they know. More than once I send messages to nature-loving politicians. I get the answer that they know, but 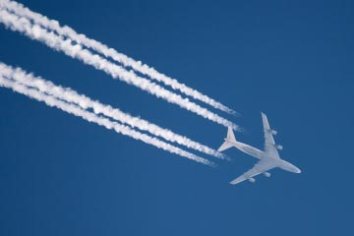 unfortunately they get not enough support from the government to do something against. Furious, because every sunny day they repeatedly spray. Besides special planes, it happens also by passenger aircraft, whose pilots do not even know they leave these traces behind.  With my ultra-sensitivity I smell it, I taste it (metallic taste) and I immediately get watery eyes and a sore thick throat when I walk my dog ​​along the sea. I then run home and set everything in its power to get the toxins out of my body. Intuitively I have the right methods for that. Insomnia which I suffer from, I take for granted and that taught me to meditate easily so I can rest anyway. Melatonin tablets (pure nature) are also helpful.

As I wrote earlier in the article ‘Wake up, be awake and stay awake! you can see pictures that have to do with this secret” crime “(which fortunately is no longer a secret to the most of us, thanks to the internet). Facebook immediately deleted these (search also on twitter by the term #chemtrails) and even some of their accounts. Moreover,  the sheeple need to remain sheeple. Part of mind control, you know.

There are still many people in my neighborhood, who would rather follow the mainstream media because the truth is too threatening. In psychological terms this is called “cognitive dissonance”. Information that is contrary to the image that one has of the world, is

rejected. You want to stay in, or not taken out of your comfort zone, even if it is often the least comfortable position, it’s familiar! We now live in a time when we are increasingly sensitive and our consciousness expands into multi-dimensional consciousness. More and more people no longer believe the information they receive from the mainstream media and “feel” that something is wrong or that the world becomes very threatening with all these natural disasters, barbaric massacres, untreatable diseases, fires, and the danger of World War III looming ahead.

The time of ‘we can not do anything’ has gone! The first thing an intelligent and “feeling” human being has to do is to become aware of WHAT is happening and HOW it happens. The next question is “WHY” it happens. This last question is the most important one, and I’m not going to answer it for you. Even though I seem to know these answers for myself with great certainty and not unfortunately since today or even yesterday. But when we found answers to”what, how and why’  for ourselves we got the basis for the big change that most of us hope and apparently waiting for. Simply by saying that we are going to rebel against and reject the ‘mind-controlling’ propaganda and no longer take it as face value.

It is not for me to fill in, because precisely the intention is, that you develop your own awareness process at your own pace and in your own individual way. To become aware of thát piece of ‘consciousness’  is the reason why we are here, and each of us has its own individual path to walk and to create. And that deserves anyone’s respect in every living individual. What I feel really need to do is to write about the things that are happening and how, so that you can determine whether you start to find these answers from your own “higher consciousness”. And so, whether you want to search for the ‘why’.  In other words, if you want to leave your comfort zone, you will have to unite your own intellect with your intuition (left and right brain hemispheres) to step into a new, unknown world that you and I are longing for.

All articles on this site may be reproduced and distributed in its entirety, provided the source and author is acknowledged